Nothing could be finer

One of my favorite places to visit is the mountains of Eastern Tennessee and Western North Carolina. There are so many places to visit and so many places to take photographs. One of them I have already published, and this is another one of my favorites. It is a little shack on a narrow road that has been there for many years. One of these days I will drive by and it will be gone, and I will be glad I recorded it. 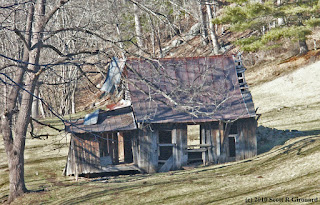 It has been almost eight years since I left my seat on the Winter Haven City Commission, and as I watch the current commission deal with the apparent desire to replace the City Manager, I am reminded of my own experience. I too, was on a commission where we had two new commissioners elected who wanted to replace the long serving City Manager, who they declared to be unresponsive to the citizens, unwilling to deal with the press, and who had been in office too long and to paraphrase "we need some house cleaning at City Hall". Those commissioners? Brooks and Easterling.

After much heated discussion the City Manager was removed with a expensive severance package, and a capable interim manager was installed while the search for a new leader ensued. What we found was that the best candidates stayed away from the City as the impression was out there that the political situation on the City Commission was unstable at best. It took a year before things settled down and we were able to find a candidate who met our requirements and was willing to take us where we wanted to go. That candidate? David Greene.

If I could offer advice from a reformed politician who views things now in a more historical perspective, it would be for our current commissioners to remember that words MEAN things. If you say it to the press, chances are it will be printed or posted, and it gets awfully hard to take back. Save your comments for the meetings, think three times before you say anything, and remember that when the evening is over, we're all on the same side.
Posted by ScottsaGator at 8:59 PM 1 comment: Links to this post

It's a matter of Priorities

Monday night is Scout Night in the Girouard household, with my younger son now a Boy Scout. My wife was the Cub Scout leader while the boys went through that phase, and I was involved in Boy Scouts during the time our older son became an Eagle Scout. What struck me tonight as we drove to the Scout House was everyone gathered at Winter Haven City Hall for tonight's City Commission meeting.

I missed many of our boy's functions during the time that I served on the City Commission. It is part of the job and I knew that going in, but I don't think that people give politicians enough credit for the sacrifices they make in their personal lives. It is easy to criticize someone from afar, but until you have been there, you really can't appreciate what it's like. I'm sure all of the new local elected officials are going through that experience now, having spent a few months in office.

Whenever I get in a discussion about local elected officials with some of my more cynical friends and they wonder why I tend to give the politicians a break (most of the time), I just tell them it comes from knowing what they are going through. So give your elected officials a break...and run for public office. Everybody should do it at least once.
Posted by ScottsaGator at 11:56 PM No comments: Links to this post 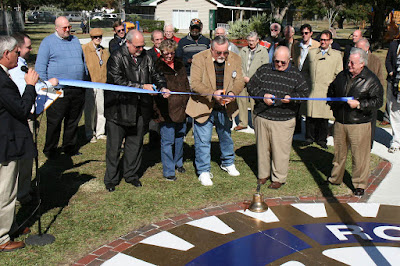 For those of you in the Polk County area, especially in Winter Haven, you are familiar with Rotary Park. If you have not visited recently, check it out, as it has recently undergone a remodeling due to the efforts of the Winter Haven Rotary Club and the City of Winter Haven. Thanks to photographer Steve Elias we have a record of the ribbon cutting and the dedication last Thursday, January 7. It was the culmination of a lot of work by many dedicated people, and I salute them.
Posted by ScottsaGator at 10:10 PM No comments: Links to this post

A Picture is worth a Thousand Words 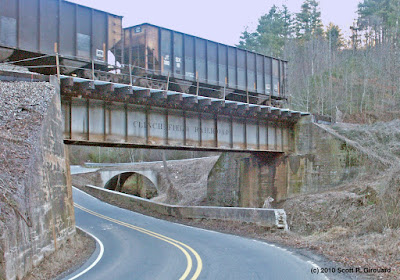 As I say in my profile I have been a part time professional photographer for many years, although lately the time spent creating images has been much more part time. One of the things I would like to do in this blog is share some of my favorite images with you. Many of these have been published and printed before, some of them are just now seeing the light of day. Feel free to comment on them or ask where and when they were taken. The first one was made on a afternoon drive "Somewhere in Western North Carolina"
Posted by ScottsaGator at 9:31 PM 2 comments: Links to this post

Read a great article on the Florida Governor's race today that was in the New York Times Magazine. If you would like to read it you can link to the story here. The story is called The First Senator from the Tea Party? Enjoy.
Posted by ScottsaGator at 3:21 PM No comments: Links to this post

Buddy Fletcher: Made to be Mayor

A good friend of mine, a great public servant left office on his own terms today. Mayor Buddy Fletcher of Lakeland is one of the good guys, having served the citizens of Lakeland and central Florida for 21 Years, 17 of those as Mayor. As my experience in local politics only lasted six years, I can truly say that Buddy was able to keep his constituents a lot happier that I was, and kept all of the political balls in the air. It was a great run and Lakeland will not see a man of his skills again soon. To read a great article about the man and his career, go to http://www.theledger.com/buddyfletcherstory .
Posted by ScottsaGator at 9:25 PM No comments: Links to this post

Allow me to introduce myself. My name is Scott Girouard and this is the first blog I have written that does not have anything to do with my job responsibilities. During my daytime life I am the Digital Advertising Manager for The Ledger, a Newspaper in Polk County, Florida. (website www.theledger.com) I also write for one of our magazines, Inside Polk, and have been a semi professional photographer for many years. I hope to share some of my photographs through this blog as well. I am also a reformed politician, having served the citizens of the City of Winter Haven. Florida as their City Commissioner and Mayor from 1996-2002. If I get inspired, I might even comment on local politics. What excites me about this is I have know idea where it might take me, but I hope to enjoy the ride. Hop on if you like.